Short films for the Satre production at Deutsches Theater Berlin

At Deutsches Theater Berlin Jette Steckel staged Jean-Paul Sartre's classic «Das Spiel ist aus». A sad-beautiful story of a lost game. For this play we conceived and shot several short films. The music for the play and the films was composed by the band «The Notwist».

Sartre's story about death still raises questions about life. In a society in which revolution follows new dictators an vice versa, enjoyment is frowned upon - where's the difference between us living men and Sartre's dead men?

Jette Steckel directed the play like a film and exchanged every perspective of each participant. While the audience is seated in total darkness on the revolving stage, the action begins in the auditorium after the introductory film. This shift between film and theater and also stage and auditorium separates the living men from the dead men.

Short films for the stage

The evening begins with a 10 minute film on the big screen. The seemingly endless ride through a train station is repeatedly interrupted by short sequences of the actual action. These tell the history, the last hours of Eve (Judith Hofmann) and Pierre (Ole Lagerpusch).

The film remains in the eternal expanded second between life and death, in a silent limbo - Then a gunshot, a falling water glass and the revolving stage starts to move.

From greenscreen to canvas

We developed the ride through the station of the film in a collage of stills and slow motion shots completely in the virtual 3D.

We photographed about 150 statists in a green screen studio. To break the static effect of photographs some characters were supposed to move minimally. By extreme slow motion shots of some actual performers of the play, we could achieve this effect. Then we created the complete train station as a 3D model and placed the cut out persons in it. The slow, virtual camera ride across the platform gives the audience a quirky angle and stylized the station as a symbol of our society. 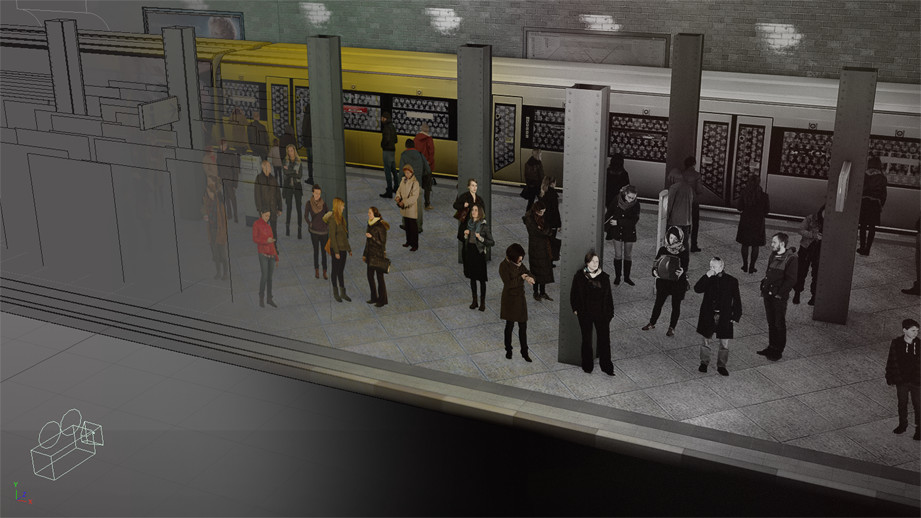 After their meeting in the realm of the dead Eve (Judith Hofmann) and Pierre (Ole Lagerpusch) obtained their second chance and the possibility of resurrection - on the condition that they have to love each other unconditionally. The film begins with the awakening, after her apparent death. The focus of the film is Eve's husband André (Alexander Khuon) who has poisoned his wife and appears helpless and angry because the attempted murder failed.

Photos from the staging